Despite that, we’ve had a really good day in the garden and everyone has been squelching around in the mud and chatting damply. Although we’re all now smelling a bit like wet dog we’ve managed to get a lot done and thanks to the Sandy man at Dundee City Council we have several tonnes of compost, half of which has been shovelled and barrowed into our raised beds and the other half of which is rapidly cascading down the hill in a muddy stream. Plus side, as Michael has just pointed out, we don’t need to water the garden.

One of our guys is currently working on a bonsai garden (I haven’t asked all the guys if they’re happy with being named online so I’ll just use initials for now). A has been doing wondrous things with what used to be scrubby little bushes and now look like 500 year old masterpieces and they’re all sitting neatly outside looking fab.

A, other A, 3P and B also spent a large chunk of the day shifting compost and the sensory garden is very nearly ready for planting up, which means we get to have another shopping excursion to Dobbies soon. I can’t contain myself I’m so excited. We missed the two G’s today and hope you’ll both be back on Thursday!

Michael (henceforth to be known as Thumbless) has been working his wee socks off on our greenhouses. His thumbs are suffering from pushing in the stuff to hold the glass in place and (a bit like Prometheus), his thumbs recover at night only to be brutally beaten down again the next day. Still, he’s going great guns and the greenhouses will be finished soon! Well done Thumbless!

In other news, I got a face full of soup today from 3P so next time you see him, throw food at him. He called it tomatoflage which I reluctantly found quite witty and amusing. I'll post photos tomorrow of me looking foolish. In fact, I'm fairly sure I have photos of everyone looking foolish who was in today so check in tomorrow for a chuckle.

Anyway, I’m gently steaming by the radiator here and I’ve nearly dried off, so it’s time for tea and then home. 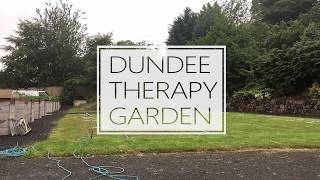 Putting up the Polytunnel!